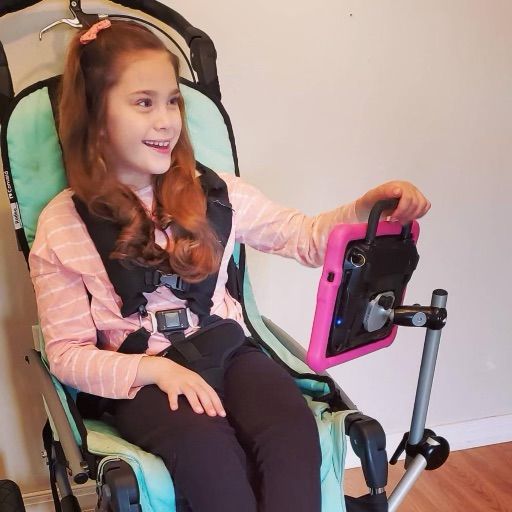 Melissa Porch has been searching for the right Alternative Augmentative Communication (AAC) device for her non-verbal daughter Naomi since she was 3.  Naomi has dysarthria and apraxia from cerebral palsy and is now 9.

Melissa says over the years, “We have tried everything.  Sign language.  Low-tech buttons and switches, everything in an effort to see what worked.”

After years of being unable to express herself, Naomi clearly felt defeated and frustrated.  She wasn’t always interested in trying new devices, especially if the other person was not engaging. “If a person isn’t making an investment in Naomi, she will tune that person out.  With an eyeroll.” 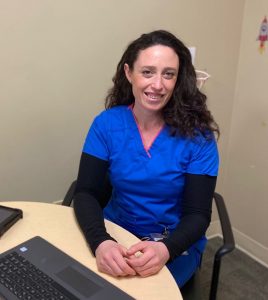 One person Naomi she did not tune out was her speech therapist, Julia Zabihach, MS, CCC-SLP.  “She was a huge find for us, Naomi really took to her,” said Melissa. “Naomi really loves Taylor Swift, and when she is working with Julia, and gets something right, Julia will play a little snippet of a Taylor Swift song.”

Julia worked with Naomi on and off for 2 years, trying different devices.  There are so many alternative augmentative communication devices out there, says Julia.  “Tobii dynavox, PRC, iPad aps, Novachat…it is a long process to choose the right one.”

Last summer Julia introduced Naomi to the Novachat 10, and “suddenly everything clicked, “said Melissa. “The different devices have different patterns, but something was just right, and she could find the word and it was incredible.”

Naomi trialed the device for 2 months in the summer, and then the family had to wait until January when she was approved to have it permanently.

“Those months were so hard,” said Mellissa.  “And when she got it back, she just shrieked with joy for hours.”

Melissa and Julia both say she is using her augmentative alternative communication device successfully in school, which is still virtual.

Julia notes that Naomi’s parents have been incredibly supportive.  “They work diligently to teach Naomi to use the device all day long throughout her daily routines, if that is possible.  I would like the public to know how important family support is.”

“We can’t sing Julia’s praises enough,” says Melissa. “The same with the whole team.  Naomi organically asked Julia to read her a book recently.  They have such a connection – when their session ends, Naomi navigates to ‘I love you.’”