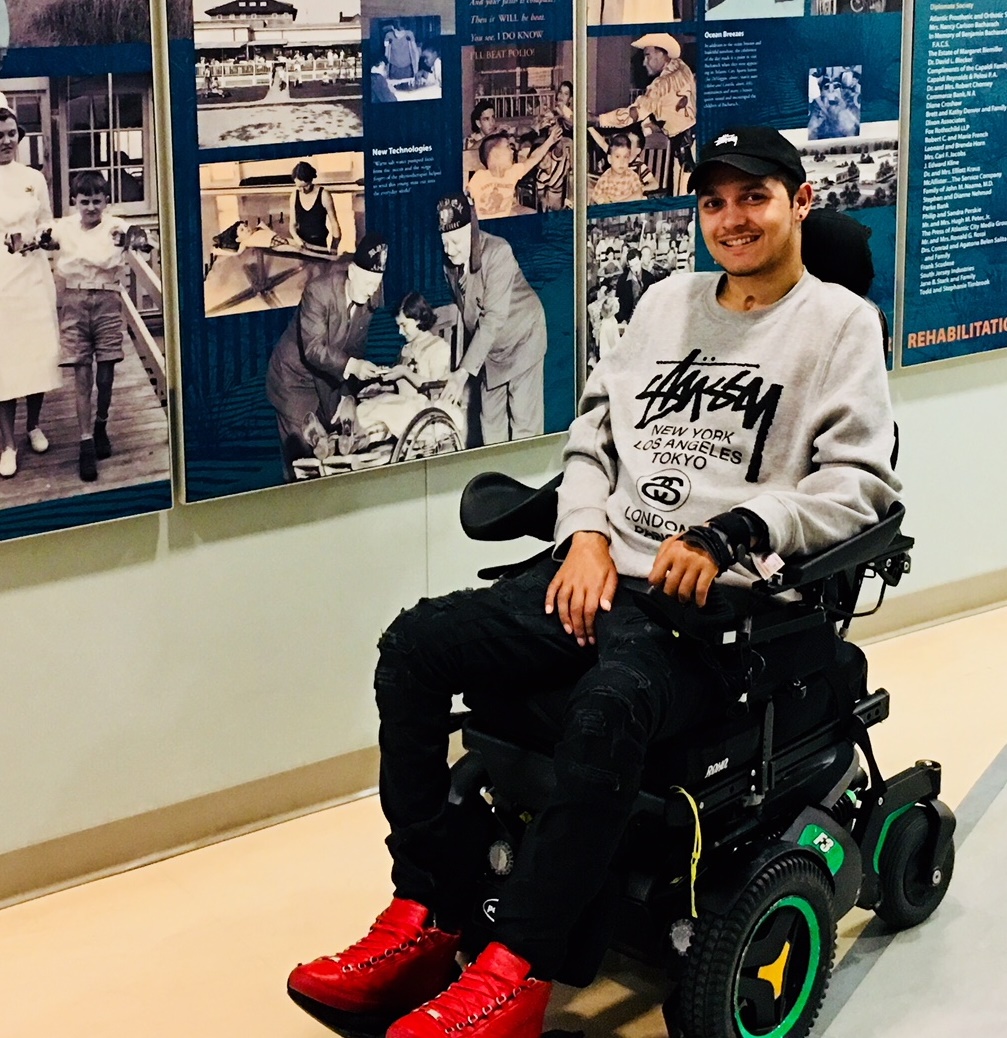 Anthony Marquez was tumbling at an indoor trampoline park when everything went wrong. He was airborne on a jump when he noticed a young girl running beneath him, so he quickly tried to avoid landing on her and ended up landing on his neck.

“I broke both the C4 and C5 vertebrae in my neck ̶– it was a complete break,” said Anthony. “I was paralyzed and in the ICU for a couple of months before I was discharged to Kessler, a rehabilitation hospital in West Orange. At Kessler they focused on getting me to breathe on my own, stabilizing my blood pressure and working on my speech and memory.”

Toward the end of his stay at Kessler, Anthony started making progress on moving his arms. When he returned home, he began home therapy to strengthen his arms and shoulders. Eventually, he felt he got all he could out of home therapy and almost one year after his accident he turned to Bacharach.

Two times each week, Anthony goes to rehab in Bacharach’s Klinghoffer Neurorecovery Center, where he has used many of the new robots. “I really like using all the robots – especially the Diego,” said Anthony. “All the interactive games on the robots are perfect for me because I am a very competitive person.”

Anthony’s therapy is focused on regaining strength and movement in his arms so that he can become more independent. “When I first started at Bacharach I could barely flip my wrist, but after working my left arm, I can control my wheelchair completely by myself, feed myself, shake people’s hands and do the little things, like scratch my nose.”

Through his rehabilitation, Anthony has bonded with his physical therapist Dante Brunelli, and his occupational therapist Leila Kohute. “Dante is always very entertaining. We had a routine down and he always made it fun,” said Anthony. “Leila’s creativity is insane, she is always very determined to figure things out.”

Anthony continues to work toward his goals, which include feeding himself with his right arm, balancing when he is sitting by himself, sitting up by himself and improving his wrist control and finger movements.

“Anthony has such a great attitude,” said Leila Kohute, OT. “He is motivated, competitive and always gives 150 percent in therapy. He continues to get stronger each week and is an inspiration to so many people.”

Because Anthony has become such an inspiration to Bacharach’s staff and patients, Bacharach has asked Anthony to be the emcee for this year’s Ability Fair.

“I’m really excited to both attend and emcee this year’s Ability Fair. I’ve never had the chance to attend their Ability Fair, but I’ve heard some cool things about it and can’t wait,” said Anthony. “Bacharach has helped me improve so much – their therapy is 10/10. I prefer it to any of the rehab places that I have been to.”