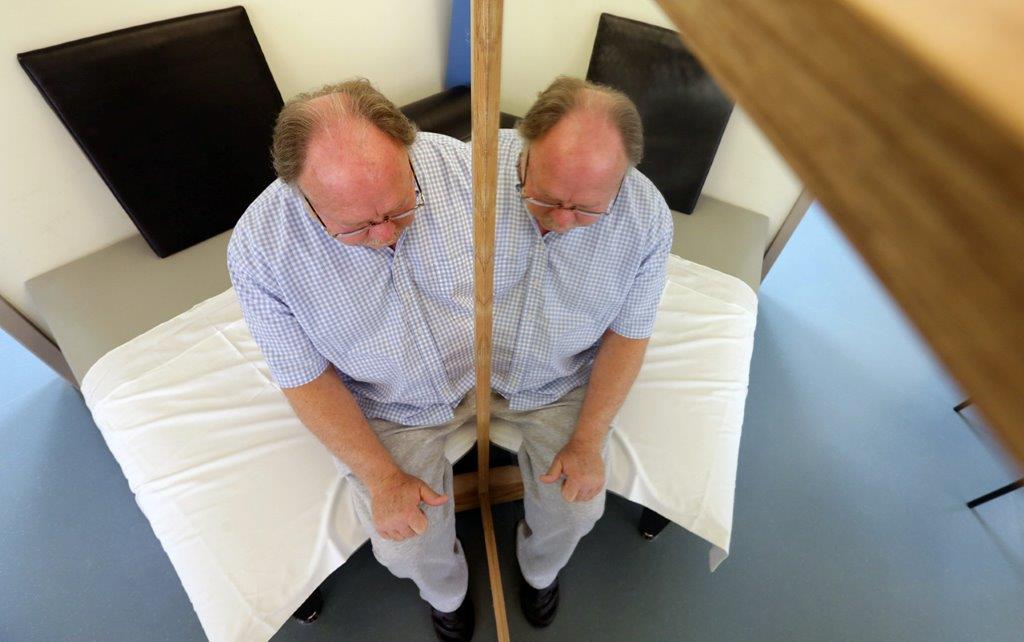 Laura Lee Smith, OTR/L, CHT became interested in graded motor imagery (GMI) while doing graduate work. She attended conferences and did research to master the innovative therapy that uses mirrors to treat patients with conditions as varied as loss of limb function from a stroke and post-amputation pain. Thanks to GMI, one of her patients recently regained the use of a hand that he was unable to move.

Graded motor imagery is a three-step process, which uses visual feedback to increase the brain’s focus and awareness of the limbs. First, patients visualize something that they used to love doing with their affected limb. Then, patients “drill” the brain to quickly switch focus from the left to right side by looking at photos of both sides of the limb. Next, standing or sitting in front of a mirror, patients hide the affected limb and move the functioning limb in front of the mirror, causing patients to see two limbs moving and get the sensation that both limbs are working. This process allows the brain to create new pathways to the affected limb and stimulate earlier connections, often resulting in recovery of movement and function.

Laura Lee’s patient, Paul Kelly (pictured above), had lost all feeling in his left hand and arm after experiencing a stroke in the right side of his brain almost 12 years ago. His physiatrist, Dr. Abraham Alfaro, recommended that he work with Laura Lee for a shoulder issue he was having. After only a few sessions focusing on reducing muscle tightness, it became clear that there was some sensation returning to Paul’s left side, which meant that his brain was still able to send perceptions to his hand.

Paul practiced the technique diligently at home and one day realized he had sensation in his affected hand. “I couldn’t wait to see Laura Lee to let her know that I could feel my hand. She was so excited when she realized I had sensation – she immediately took out a pouch with different items and started putting them in my left hand to see if I could recognize them. I recognized six or seven things and I was so thrilled just to think that my left hand was actually moving.” Paul started working with Laura Lee on GMI therapy and is becoming more active every day. He can now hug his wife, walk without a cane and is starting to write with the affected hand.

Laura Lee has moved to a new, enlarged space at Galloway Tilton Fitness called the Galloway Physical Therapy and Hand Therapy Center. This new space will allow her to focus her practice on treating patients who need hand therapy, using GMI and other hand therapies such as splinting, modalities, manual therapies, and massage techniques such as Graston.

To see a video of Paul and Laura Lee, visit NJTV’s YouTube or the Bacharach Facebook page.