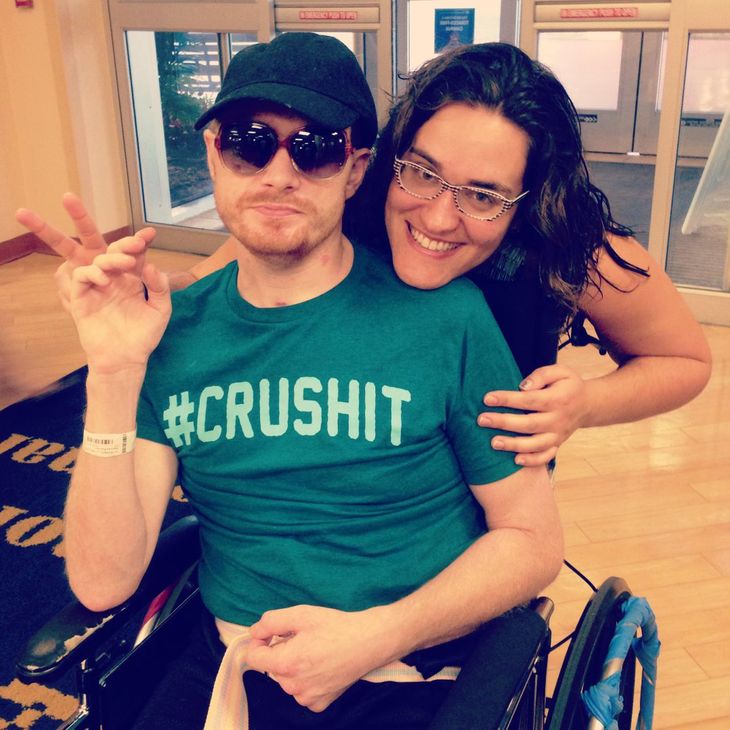 Patrick Sheeran, Jr. and Andrea (Anj) Granieri met at Holy Spirit High school when they were both 16 and in the school band.  He was a drummer; she was a piano player, and they became great friends – secretly meeting in the auditorium and spending time together after school.  When Patrick was leaving for college, their relationship became romantic. They looked forward to spending holidays together and talking all night on the phone.  When college was over, they went their own separate ways. It wasn’t until eight years later, when they were both 30 years old, that that they bumped in to each other again and realized they belonged together.

On November 8, 2013, something happened that would change their lives forever.  Patrick was hit by a car while away in Florida and sustained a severe traumatic brain injury (TBI), a shattered knee and leg and a post-traumatic stroke. He was in a coma for 10 days. Anj flew to his side and stayed with him until he was able to be moved back to New Jersey and has not left him since – becoming his full-time caregiver and biggest advocate.  Since the accident, Patrick has undergone extensive testing and surgeries to repair the serious damage he suffered.

Patrick started physical therapy, occupational therapy and speech therapy at Bacharach in October of 2014. Anj shared, “Patrick has made amazing progress. We are blessed because Patrick has a good relationship with all of his therapists at Bacharach and they allow me to participate and be hands-on. I sit in on his sessions and have learned how to do his exercises with him at home.”  She continued, “The Bacharach therapists have helped Patrick to advance tremendously.  In addition to being very skilled at what they do – they treat him with respect.”

As Patrick continues his therapy at Bacharach he has both physical and cognitive goals that he is working toward. Anj explained, “He used to run 15 miles each day and he would love to be able to run again.  Another big goal of ours is for him to be able to play music again, especially if we could play music together. Right now, he is working on balance and strengthening his left side.”

According to the Centers for Disease Control and Prevention – 1.7 million people each year are diagnosed with a traumatic brain injury. Anj and Patrick recently started a blog called 16 Petals of Blue Light to write about their experience and raise awareness of the reality of living with a traumatic brain injury. Written from the perspective of a TBI survivor and a caregiver, the blog offers a detailed overview of the day-to-day challenges each of them face. Anj said, “We are really excited about the blog and excited to share our thoughts and feelings. Patrick was an avid writer before the accident and this will provide him with a forum to chronicle his journey. We are also hoping to connect with and help those facing situations that are similar to ours.”