In the first year of life, babies make all sorts of adorable noises, babbling and cooing and vocalizing in all sorts of ways.

At 12 months, there is a new stage of development. “There is more development of naming familiar people, pointing, grabbing, even incomplete words that are approximations,” says Megan Reynolds, MS, CCC-SLP. “You see the child using a lot of gestures and understanding ‘yes’ and ‘no’.”

An Explosion of Language

“Between 12 months and 24 months you see an explosion of language,” says Megan. “At this point children should be naming familiar foods and familiar objects. They should be listening to simple songs and children’s rhymes, like the song ‘Head, shoulders, knees and toes.’  They should have about fifty words for common food and familiar people.”

“It’s ok if they don’t say every part or every sound in the word, if they are intelligible to the parents who can translate, that’s ok.”

In terms of receptive language, between ages one and two, they should follow simple one step directions, like ‘Go get your shoes.’  So, they are listening, understanding, and following through with the action.”

“A parent might want to seek an evaluation if the child is not combining two words by age 2, for example ‘Mama milk!’ or ‘Car go!’ If they are struggling with two-word sentences or phrases, or not following directions, that’s a concern.”

The Goal is Functional Language

“If the child knows the letters of the alphabet, that’s great but you really want the child to have functional language. You want to be able to ask what hurts, then have the child be able to respond and show you the body part.”

Parents who want to encourage language development should read, but not only read, also add commentary to the images in the book. “It’s ok if the child is really young, too young to listen to a story. You can still look at the pictures together and talk about what you see.” 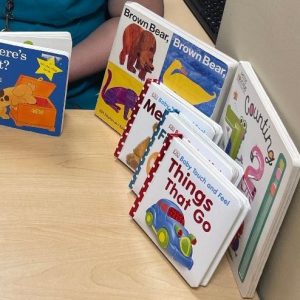 “Since Early Intervention is still only virtual, we are seeing many more children than before the pandemic.”

Megan encourages parents who have concerns to consider an evaluation rather than waiting until age 3 or older. “At that age we have lost so much language development time,” she says.

“The goal of language development is functional communication, not just naming objects.”