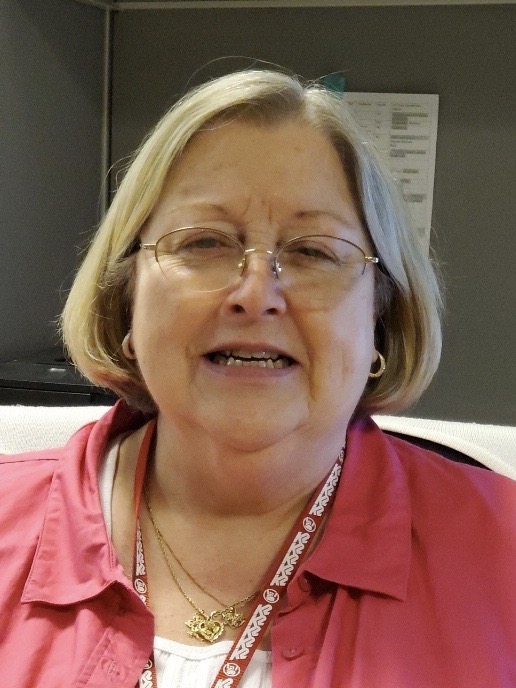 Kim Ahrens Helmar began her career at Bacharach in 1974

Kim  Ahrens Helmar says Bacharach let her keep her original employee number after she returned from a 2 ½ year gig at another job.

“In 1974, I had a friend, Judy Peterson, who worked at Bacharach,” said Kim.  “There was a job opening in the physical therapy department for an aide, and Mrs. McGough liked to hire people other people knew, so she asked if anyone had a friend. I came in for an interview, got hired on the spot and started the next day.”

Kim was there in June of 1975 when Bacharach moved to its present campus in Pomona.  “The walls were yellow and brown tile then, and we washed them down,” she remembers.

“The gym was always the gym but had inpatients and outpatients.  What are staff offices today were individual treatment cubicles.  And there were two big Hubbard tanks in the whirlpool room, and 2 or 3 high-boys and low-boys for whirlpool treatments.  I was a PT aide for 5 years.  In those days, we got the patients ready for therapy.  We got them hot or cold packs, or put their feet in the hot water to clean the wound. We were in charge of getting all that ready, getting patients in and out of the water, getting them dressed.”

“Then I became a patient care coordinator.  I used to gather the patient information and find out their benefits. I used to do the PEC list, type it up and distribute it.”

“I left for 2 ½ years to work for Dr. Strenger.  I was young and wanted to see what else was out there, but in 1988, I came back as a temp in the psychology department.  Mr. Affanato said to me, ‘Kim, if there is an opening, would you stay?’ and I said yes.  When I came back, they gave me back my old employee number.”

What makes working at Bacharach so special?

“It feels like a family because of the people who have been here so long,” she said.  “I spend 8 hours a day with them, I don’t spend 8 hours with my husband!  When we were smaller, I used to know the first name of everyone who was there.”