Tennis elbow and golfer’s elbow are just two of many common injuries to the elbow.

They share some similarities in diagnosing as well as in treating. Despite their names, both injuries are usually caused by an activity other than golf or tennis.

“Golfer’s elbow, also known as medial epicondylitis, affects the inside of the elbow and usually causes pain that radiates into the forearm,” said Patty Chichester, OT for Bacharach’s Mays Landing, Marmora and Ocean City locations. “Many of my patients have never played golf, but have injured themselves playing baseball, going bowling, doing home improvement work or other tasks.” 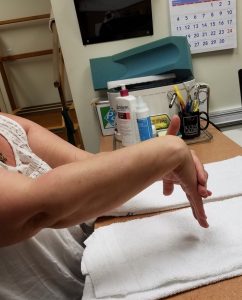 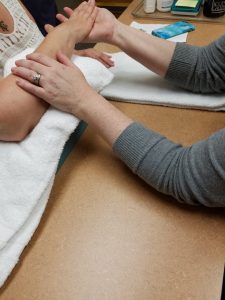 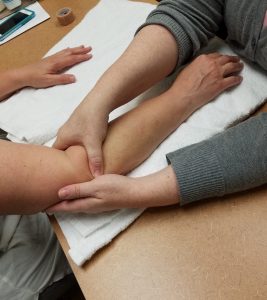 Tennis elbow, the more common of the two injuries,  is also known as lateral epicondylitis. It often presents with pain on the outside of the elbow that increases with movement of the wrist—especially when the wrist is bent.  Patty has treated patients who developed tennis elbow from using a chainsaw or tools, painting with a roller brush and more.

“A lot of these injuries occur because people are repetitively using the same muscle groups without properly stretching because they don’t think they are exercising,” said Patty. “People also tend to ignore the pain and work through it until the activity is complete. Then they think they just ‘pulled a muscle’ and try to treat the injury at home, often unsuccessfully, for a period of weeks or months.  When the pain doesn’t go away and begins to affect their everyday function, they decide d to visit a health care professional for evaluation and treatment. ”

According to Patty the first step in treating tennis and golfer’s elbow is to evaluate the flexibility and strength of the elbow and reduce the pain with an elbow brace or tape. Stretching, both during the therapy appointment and at home, helps to work on flexibility.  Reducing pain and returning to flexibility are the primary goals and once pain has receded, strength and stabilization exercises can begin. Education on the diagnosis and on preventing recurrence is also important.

“A big part of treatment for tennis and golfer’s elbow is an activity analysis,” said Patty. “Through activity analysis we are able to pinpoint what motion is causing pain and teach proper form and body mechanics to prevent the injury from reoccurring in the future. Using the proper tool for the activity and maintaining equipment for sports or other tasks, such as an adequate grip surface on golf clubs or kayak paddles, and adequate string tension on tennis rackets is important.”

Early diagnosis and utilization of a counterforce brace or wrist splint can facilitate the return to normal function.

“I’ve treated people that have reported that they have had these injuries prior to coming to an OT, but they came to me because it was getting worse,” said Patty.   “Teaching a good stretching and strengthening program to use after therapy is crucial to maintaining optimum arm function.”