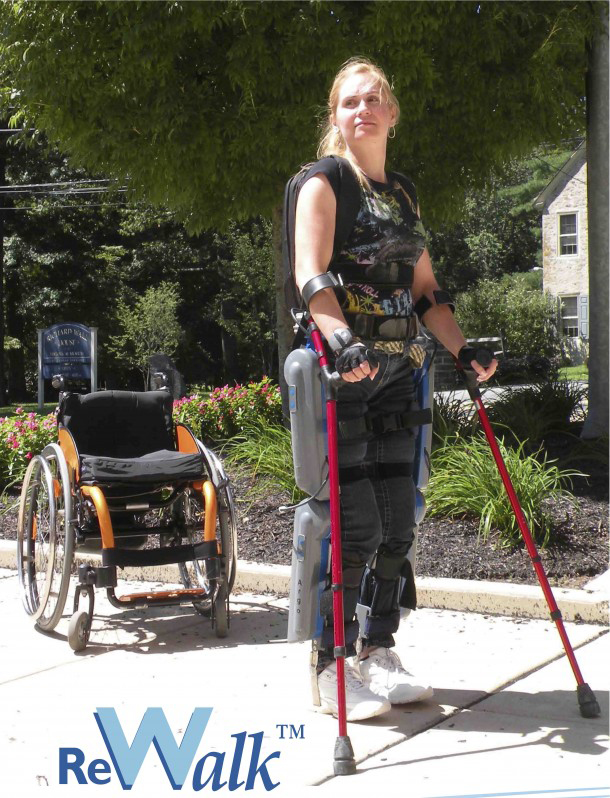 Bacharach recently received a generous monetary donation of $72,240 from our friends at the Ruth Newman Shapiro (RNS) Cancer and Heart Fund. This donation will be used to purchase a ReWalk Exoskeleton—a device that spinal cord injury patients wear to walk and stand independently—making Bacharach the only facility in the region to offer a ReWalk for rehabilitation.

Developed by Dr. Amit Goffer, an Israeli inventor who became a quadriplegic after an ATV accident in 1997, ReWalk consists of cutting-edge technology that enables spinal cord patients to stand and walk again by providing powered hip and leg motions. Patients wear a brace support that is individually fit to their body, along with a backpack with a computerized control system and motion sensors. Recently approved by the Food and Drug Administration (FDA), the ReWalk can be used at home and in the community.

In addition to helping patients independently stand and walk, clinical studies of the ReWalk show significant physiological and psychological health benefits. These benefits include improvements in cardiovascular health, loss of fat tissue and building of lean muscle mass.

The RNS Cancer and Heart Fund is an all-volunteer organization that recently celebrated more than 50 years of dedicated service to the community and has raised more than $15 million to fund programs, services and equipment purchases for hospitals in the region.

With the help of RNS Cancer and Heart Fund, Bacharach will have a ReWalk exoskeleton permanently available, remarkably changing patients’ lives for the better.