News
The Sled Stars: There Are No Disabilities on the Ice
in Ability Fair on Jun 21, 2019
Share

When Brian Olsen first learned that his son, Jacob, had been born with spina bifida, he did not know what Jacob’s future would hold.

But the family’s lives changed forever when they took Jacob to an ice-skating event where they were introduced to sled hockey.

“Although we had heard all about Special Olympics, we did not know there were teams out there for children with physical disabilities. We discovered the sled hockey team by luck when Jacob was four years old,” says Brian.

The Olsen family was attending an event held by a local skate school to give children with disabilities the opportunity to use their ice rink, when they first encountered a local sled hockey team, the Sled Stars.

“The Sled Stars were giving kids an opportunity to try out the sled and the moment we put Jacob in the sled, he was hooked. He loved it so much that he actually cried when he had to get out of it,” says Brian.

The Sled Stars hockey team consists of players from 5 to 18 years old who all have a physical disability that prevents them from standing. Jacob and Brian have been involved with the Sled Stars for five years, and Brian has served as head coach for the past three years.

“Joining the Sled Stars has changed my family’s life and really launched us into the world of disabled sports,” says Brian. “The team is one big family. Jacob recently switched to playing goalie, and it has been amazing to see all the older players rally around him and protect him.” 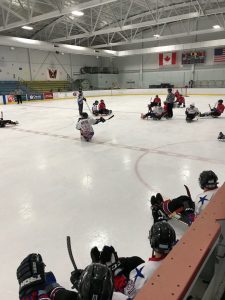 From September through April, Brian and Jacob’s weekends are packed with sled hockey practices and traveling to Philadelphia, Baltimore, Virginia and Massachusetts for games. “Hockey has become Jacob’s favorite sport. He is constantly asking me questions about the game, and we enjoy watching any hockey game together.  It’s especially rewarding to watch the Paralympic U.S. Hockey Team. As it’s Jacob’s goal to play for them one day,” says Brian.

Jacob also plays for the Philadelphia Hammerheads Sled Hockey Team and competes on Paralympic track and field and swim teams.

“It is very important for children with disabilities to stay active,” says Brian. “Each hockey season I see firsthand the effects that being active has on these kids. At the start of the season we need to strap some kids into their sleds to keep them upright, but after three to four weeks of training they are able to hold themselves up.” 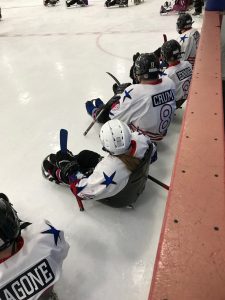 Brian was recently certified as a track and field coach and is trying to expand Jacob’s North Jersey based team into South Jersey in order to continue to help kids like Jacob be active and socialize with children like them.

Leaning on the Disabled Sports Community

“One of the best things that has come out of Jacob being so active in the disabled sports community is that Jacob has formed relationships with kids who are going through the same things as he is. He gets to see how they deal with their struggles and has learned to be less self-conscious about his own,” says Brian.

While there are a lot of resources for disabled children, Brian encourages families to do the research to find what is best for their child. While hockey may not be a good fit, there are plenty of other activities they could get involved in, like horseback riding.

“It is a blessing to be able to coach my son, and Jacob enjoys the time we get to spend together on the ice,” said Brian. “There is nothing better than seeing Jacob and his teammates happy and smiling on the ice – getting the opportunity to just be kids playing hockey together.”